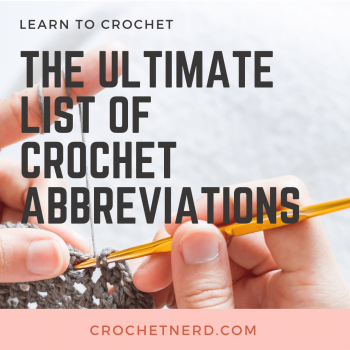 Learning the various crochet abbreviations is a necessity when you begin to read and follow patterns on your own. The abbreviations used in the pattern may be defined up front if you’re reading a written pattern in a book, but might not be if you’re downloading a pattern from the Internet. Furthermore, the author might make an assumption that you know an abbreviation that you don’t, which is why I’ve come up with a list of the standard ones we use in crochet so that you can familiarize yourself with them, or use this post as a reference tool.

Abbreviations used in a crochet pattern are most commonly noted at the beginning of the pattern before the instructions begin. This is to educate the creator as they read through the pattern, I recommend reading through ever4y pattern you make at least one time in its entirety before you begin–this way there are no surprises along the way, and you’ll have ample time to ask questions before you get to a crucial piece in your project.

Please note that some of the crochet terminology is different between US and UK, so naturally, the abbreviations will be different as well. Feel free to read my post on the differences in US and UK terminology to learn what to watch for when you read patterns.

These are the most common crochet abbreviations written in US Terms listed in alphabetical order:

alt – alternate: Most commonly used to instruct crocheter to alternate stitches or rows.

approx – approximately: This term often measures distance. For example you might need approx 4 yards of yarn for this project.

beg – begin or beginning: This can be used in reference to the beginning of your row, or can be used as an instruction to begin creating a certain number of stitches.

bet – between: I’ve seen this used several times in the instructions to repeat a portion of a project.

BL or BLO – Back Loop or Back Loop Only: An instruction to only crochet into the back loop of the stitch. Often done to create a ribbed look, or if the pattern calls for coming back to use the front loop for another stitch later (such as in mosaic crochet).

bo – bobble: A bobble is a series of stitches performed in one stitch to give the appearance of texture to your project.

CC – Contrasting Color: An indication to change color to a contrasting one than you’ve previously been using in your project.

ch – Chain: Commonly found both at the beginning when you chain, during stitches to make a gap to use in your pattern, or after you end rows and join to increase.

CL – Cluster: A cluster of stitches performed. There will be further instruction along with this abbreviation regarding what the stitches in the cluster should be.

cont – continue: An abbreviation telling you to keep going. Most commonly followed with a specific point in your project that you need to continue doing the same stitch pattern until.

dec – decrease: Used to define the point in which you begin to decrease your stitch count.

dtr – double treble: A crochet stitch in which you yarn over 3 times before inserting your hook, and yarn over and pull through 2 loops until you have one left on your hook (a total of four times). This ends up being a very tall stitch.

edc – extended double crochet: A crochet stitch that extends a regular double crochet in size and is good for use in ripple patterns.

FL or FLO – Front Loop or Front Loop Only: A crochet technique in which you perform a stitch by inserting your hook into the front loop of your project, often leaving the back loop for either a different stitch, or to create a ridged appearance.

foll – following: While I haven’t seen this too often in crochet, I have in many knit patterns. For example: foll alt row would indicate that you should follow the same pattern on the alternate row.

inc – increase: An instruction indicating that you will increase the stitch count of that row.

lp – loop: This is referring to the loops of yarn you enter with your crochet hook to perform a crochet stitch. There are 2 loops while you are working on a crochet piece, the front and back.

m – marker: Refers to a spot in your crochet where you’d add a marker (either a stitch marker, or I sometimes like to use a piece of yarn that is a contrasting color).

MC – Main Color: The main yarn color you are using for your project.

pat – pattern: The set of instructions you follow to create a crochet piece.

pc – popcorn stitch: A crochet stitch that combined several stitches in one to create a popcorn type of look.

pm – place marker: A tool used to mark your place in your project so that you can locate a certain point in your crochet project.

prev – previous: This instruction is often used to reference a previous instruction that you might need to do again, or to indicate something that was done on a previous row.

ps or puff – puff stitch: A technique used to make a stitch that puffs up from the fabric.

rem – remaining: An instruction used in crochet patterns to indicate following for the rem (remaining or remainder) of the row.

rep – repeat: To repeat a certain set of instructions. Normally denoted by asterisks — from * to *

rnd – round: When crocheting in the round, rnd or rnds is often used in instructions for rows in the round.

RS – right side: The right side, or side of the project that is designed to show most often.

sc2tog – single crochet 2 together: The act of crocheting two single stitches together to decrease it to one stitch.

sh – shell: A technique used to form the appearance of a shell in your crochet pattern.

sk – skip: An instruction to skip the next stitch in the pattern.

sl st – slip stitch: This crochet abbreviation is often used to join rows (if crocheting in the round), when you fasten off your project, or to create a certain pattern in your project.

sm or sl m – slip marker: A slip marker is more commonly known to the knitters as a marker that you slip from one stitch to another in your work. As opposed to a place marker where you simple place to marker at the spot and wait to be told what to do with it when you come around to it again..

st or sts – stitch or stitches: An instruction often used in crochet patterns.

tbl – through back loop: An instruction indicating that you only need to crochet into the back loop, not the front one.

tch or t ch – turning chain: This is the chain you make at the end of the row so that your row starts out at the same height as the rest of your stitches.

tog – together: A term often used in stitch decreasing where you crochet stitches together.

tr2tog – triple (or treble) crochet 2 together: Crocheting two treble stitches together in order to decrease the stitch count in your row.

WS – Wrong Side: The back of your crochet project.

yoh – yarn over hook: The instruction of placing the yarn over your hook before you insert your crochet hook into the stitch.

I hope that you picked up some helpful tidbits about crochet abbreviations today that you might not have known before. It’s helpful to bookmark these as a guide for when you are learning to read, or even write patterns. For resources on crochet terms and industry standards for pattern writing, visit the Craft Yarn Council website.

and My Palms Are Sweaty

I’m Amanda, Chief Nerd and Crochet Entrepreneur, Crochet is my passion. I want to teach you so that it can be yours, too. Learn more about me here. 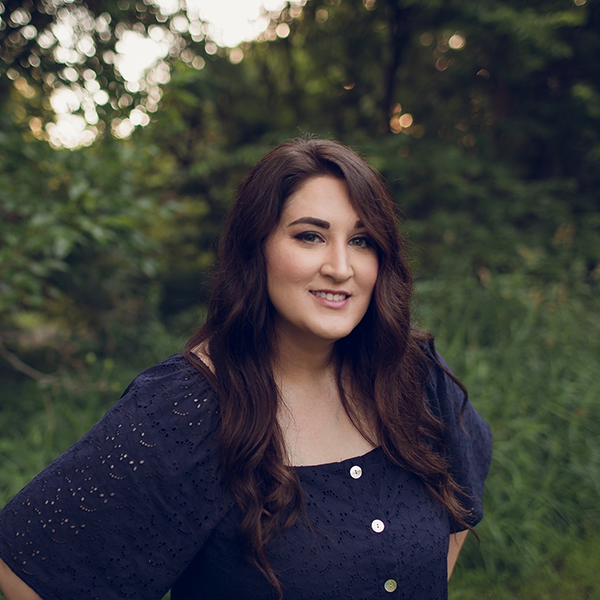